When Zack and his friends find a coded message in the hole in the old oak tree in the park, they are determined to break the code. But it is not until they enlist the help of Evan Zolotny, the new kid in town who everyone knows is an egghead, that they decipher it: tonight, eleven fifteen, river bend. Someone is meeting that very night, but who? And where is river bend? They decide to return the note to the tree and set up a stakeout to see who will retrieve it. Before the end of the day, they have stumbled onto a den of thieves. And soon they discover that it is up to them to thwart these villains.

Besides the mystery itself is the tale of Evan, the poor kid from the other side of town who has lost his mother and rarely sees his father because he is working three jobs. Zack befriends him and draws him into the “gang,” a group of energetic friends ready for adventure.The book is beautifully written, fast paced and full of action. I recommend it for all middle grade readers.

Available in both regular and open dyslexic fonts. For  regular font, To order from Amazon, click here.

Nine skulls a remote clearing in the Black Hills outside have been placed in an incomplete circle. Ben Logan, chief of police, can only conclude that more children must die. But why? And when? Two local teens vanish, and rumors of a Satanic cult spread quickly. Ben finds the teens’ bodies, headless and hearts cut out. A silver medallion in the mud is the only clue to the killer. As Ben chases rumors and reports, he’s suspended on a trumped-up charge lodged by a jealous officer. Unfettered by his badge, he follows his instincts, even when they flout the law. Nightmares of slashing talons and a vanishing girl unlock a horrifying childhood secret, a secret Ben’s mind has blocked but his heart has not forgotten, and when two more children disappear, the nightmare becomes real. This taut procedural draws readers into the hearts and minds of two men, one who has chosen to uphold good and one who worships evil. Who will win?  To order from Amazon, click here.

In Past Lives, beautiful and frigid Mara Cinque seeks a cure from Dr. Richard Tumesso, a psychiatrist who uses hypno-regressive therapy to help her relive and conquer her fears. He’s not prepared for the many lives that Mara reveals: as a woman on the prowl in a USO club during WWII, a prostitute in Toulouse-Latrec’s Paris, a soldier blinded during a Crimean War battle, a Tahitian woman who happily shares herself with the captain of the Bounty, a young widow in Salem during the witch trials, an unloved empress during China’s Tang Dynasty, a Nordic maiden who marries a Viking captain to save her village from destruction, and a Druidic Middle Priestess during a Samhain rite.

As Mara relives the horrors and joys of her past lives, she begins to fall for her therapist, as he does for her. Once she’s cured and no longer his patient, they are free to explore each other the way they’ve longed to. Click here to order from Amazon

When Caitlin Morrisey’s parents are killed in a freak accident, she must take over the care of her younger brother and sister and try to keep the family ranch afloat by turning the old barn into a B&B. Mysterious lights in the pasture, an unexplained fire in the new inn, and a legend of hidden Spanish treasure threaten the future of Caitlin, her family, and her home. Click here to order from Amazon 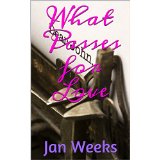 • An old woman takes control of her life as she nears the end.
• A mentally ill mother makes one last surreptitious visit to her husband and son.
• A son defies his dying mother’s wish.
• A potential dropout learns empathy the hard way when the school burns.
• A couple must cope with the aftermath of 9/11 while overseas.
• A homeless woman says goodbye to the daughter she has failed to protect.
• A divorced mother finds her nemesis in a New Mexico bar.
• A young boy is chosen to bear the sins of his family to save them from damnation.  Click here to order from Amazon

In spite of plans, hopes, and dreams life seldom unfolds the way we want it to. The characters in these eight stories discover hidden strengths and weaknesses that take them down entirely different paths from what they’ve imagined. Click here to order from Amazon

In this collection of supernatural stories, you’ll meet:
•A blind, retarded, crippled boy who can change the weather at will.
•A ghostly friend who saves the young narrator from a gruesome death with an unspoken warning.
•A man beset by humanoid beasts in a New Mexico forest when his van breaks down at dusk.
•A man so terrified of “them” that he takes extraordinary measures to remain safe during the dark hours, including murder.
•A mirror that shows a woman the worst sides of her guests’ natures during a housewarming party and the decisions she must make.
•A party of archaeologists discovers that an unknown tribe of natives is the least of their problems as they search for a Mayan temple deep in the jungle of Central America.  Click here to order from Amazon

3999 Mission Boulevard,
San Diego CA 92109
1-202-555-1212
Sela is not your typical business theme. Vibrant, bold, and clean, with lots of space for large images, it’s a perfect canvas to tell your company’s story. Sela is responsive, which means it adapts to any screen, providing your visitors with a great browsing experience on any device.